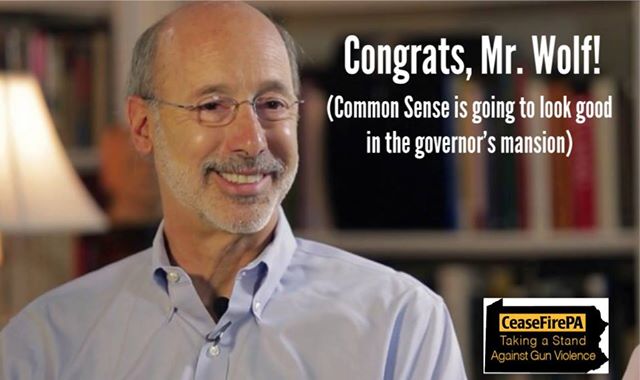 So, it’s the day after. How are things different for gun violence prevention in PA?

Well, for one thing we have a new Governor, Tom Wolf.  Unlike Governor Corbett, Wolf answered our candidate survey  and expressed support for key policy proposals, including expanding the background check system, maintenance of Pennsylvania’s background check system, and mandatory reporting of lost and stolen firearms.  In addition, Wolf opposed the special standing/expanded preemption legislation that was rammed through in the last session days before the election.  Had Wolf been the Governor last week, that legislation would not have been signed.

So, as a result of yesterday’s election, we will have something we have not had in four years, a Governor who supports common sense gun policies, understands that measures like background checks and mandatory reporting do not infringe the rights of law abiding gun owners, and knows we must take action to stem the flow of illegal guns and protect our communities.  That’s a tremendous change.  And we have one more example of someone who can win a statewide election while supporting common sense gun policies.

As to the rest of the electoral results, as expected, the Republicans maintained, and actually grew, their majorities in both the State House and State Senate.  However, our work has never focused on party affiliation. We have always based our evaluations of incumbents and candidates by examining, respectively, how incumbents voted on our issues and how candidates talked about our issues.

As a result, we endorsed and supported representatives on both sides of the aisle in 2014.  We supported several incumbent Republicans against Democratic challengers who were strong on our issue because the incumbents had proven themselves by voting in favor of expanding background checks and against special standing/expanded preemption. We are pleased that Bill Adolph, Warren Kampf, and Chris Ross are returning to the House of Representatives.  We remained neutral in Rep. Joe Hackett’s race because of his strong support for background checks, and we hope he will continue to be a leader on this issue in the coming session.

Of the Representatives who lost their seats this year, only one, Mark Painter, voted in favor of background check expansion and against the special standing/expanded preemption legislation.  We are sorry to lose Rep. Painter, and we know we will have to work hard to gain the support of the newly elected representatives. In the Senate, all of the incumbents we supported won their elections, as did newly elected Senator Art Haywood, who promises to be a leader in the fight against gun violence. We hope Senator Greenleaf, in whose race we remained neutral, will also lead the work for common-sense policies that reduce gun violence.

There were races where we supported challengers who did not prevail, and we are obviously disappointed that those candidates will not be joining the House or Senate this year.  We have hard work ahead and intend to work with members of the House and Senate on both sides of the aisle to advance a gun violence prevention agenda to make PA safer.

Finally, there is good news from across the nation.  Governors who led the gun violence prevention fight in Colorado, Connecticut and New York have been reelected.  And, in the state of Washington, the voters solidly voted in favor of expanding background checks and rejected the gun lobby’s backdoor attempt to undermine the background check system.

All in all, today is a good day, and we look forward to moving forward in Pennsylvania.