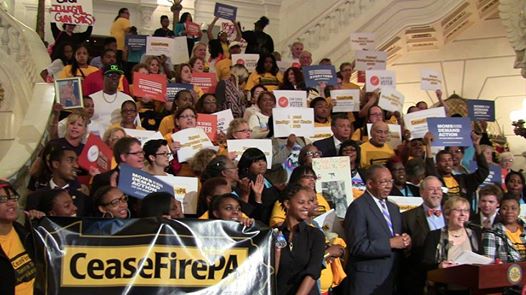 Harrisburg, September 16, 2014 — CeaseFirePA today brought hundreds of Pennsylvanians to the Capitol to urge legislators to focus on measures to make Pennsylvania safer.  In conjunction with the Center for American Progress Action Fund (CAPAF), which released a new report highlighting the increasing danger of long guns, advocates urged PA to expand the background check system to cover the private sale of long guns.  Joining CeaseFirePA and CAPAF were gun violence victims and survivors and Pennsylvanians from across the Commonwealth.

In a moving speech, Linda Kozic, who survived the Ross Township shooting last summer in which her husband was murdered, explained why she and others are motivated to action, “Gun violence is like a gigantic ripple effect that forces the individual and community to find a new norm.  Imagine how difficult it is when it took each one YEARS to form the norm they had before their world was ripped apart by bullets.”

Key findings from the CAPAF report include:

Tim Daly, Associate Director for Campaigns, Guns and Crime at CAPAF explained, “Our research has shown that long guns are increasingly contributing more to gun violence, including gun violence against law enforcement personnel and as evidenced by the recent prevalence of mass shootings. Our report makes clear that Pennsylvania must close its background check loophole by strengthening laws to keep assault weapons, rifles, shotguns and other classes of firearms out of the wrong hands.”

Speakers pointed out that although the background check legislation has been stalled in committee, the House might instead be advancing legislation that actually would be dangerous for Pennsylvania. HB 2011 would change the traditional rules of legal standing and give a special right to gun owners and organizations of gun owners to sue cities that enact ordinances, like lost or stolen reporting, to protect their communities.  Mayor Rick Gray of Lancaster and Mayor John Linder of Chester both emphasized that mayors and town councils prioritize public safety above all else and should not be penalized and even possibly bankrupted by punitive law suits.

Shira Goodman, CeaseFirePA Executive Director explained, “We should be ashamed of the inaction by Harrisburg. PA officials must heed the call of Pennsylvanians calling for real action to make us safer.  Recess is over, and it’s time to get to work.”