Dianne Feinstein: On gun control, finish the work we started 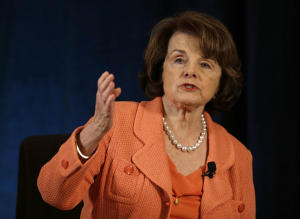 But the Brady Act does not require background checks on gun transfers made between private parties—which, estimates say, make up 40% of sales. This means anyone can purchase a firearm at a gun show or via the Internet without any background checks.

According to the Law Center to Prevent Gun Violence, California’s gun death rate has been cut by 56% over the past two decades, partly because private sales also require background checks. This is true for other states, too. A study by the anti-gun violence group Mayors Against Illegal Guns found that in states that require background checks for private sales,38% fewer women are shot to death by their partners and 39% fewer law enforcement officers are shot to death with handguns.

Another report from Mayors Against Illegal Guns looked at a sample of people intending to purchase a firearm by posting an advertisement on a popular gun classifieds website. Of the prospective buyers, 1 in 30 had a criminal record barring the individual from owning a gun.

With the Internet making it even easier for private gun purchases to occur, the loophole in the Brady Act must be closed in order to staunch the bloodshed. Read the full article here!