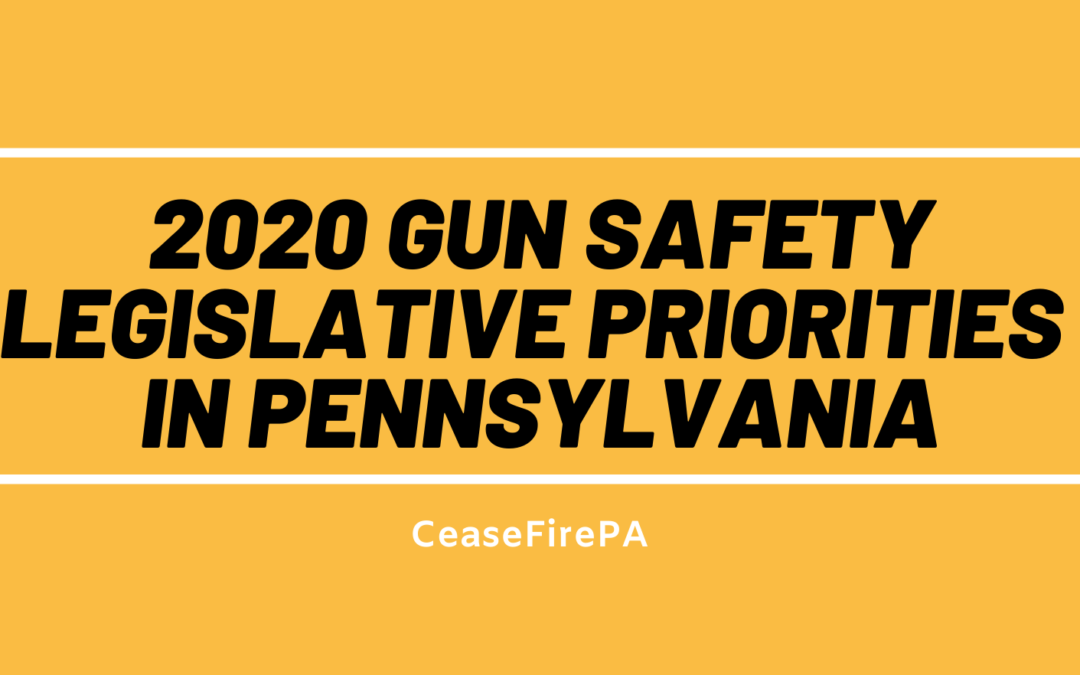 The 2020 legislative session is here!! We’re ready to fight like hell in Harrisburg to pass common-sense gun safety reforms while keeping the gun lobby on the ropes.

Here’s what we’re fighting for:

Extreme Risk Protection Order legislation (formerly known as Red Flag laws) empowers families and law enforcement to seek help when someone is in crisis by petitioning a judge to temporarily remove their access to firearms. This legislation aims to address suicides, domestic violence, and mass shootings by separating individuals from firearms temporarily and giving them the resources they need.

-In September of 2019, the Senate Judiciary Committee held two days of hearings on mental health and the Second Amendment which included in-depth testimony on ERPO. Chairwoman Lisa Baker promised the hearings were a “prelude to action” so we hope to see her make good on her promise in 2020 with votes on ERPO and other life-saving gun safety reforms.

-This bipartisan legislation has gained 72 co-sponsors in House and Senate to date.

-Recent editorials in LancasterOnline, The Philadelphia Inquirer, The Pike County Courier, and The Patriot-News have called for the passage of ERPO.

-55 lawmakers have signed onto bipartisan bills in the House and Senate to date.

-In December of 2019, Attorney General Josh Shapiro classified ghost guns as firearms, meaning their sales must be subject to background checks. This action gets us one step closer to keeping guns out of the hands of those who should not have them.

A 2016 study found that nearly one-third of guns recovered from crimes in Pittsburgh were said to be stolen. Under current Pennsylvania law, there are no requirements for gun owners to report gun theft or misplacement. New legislation holds gun owners accountable by requiring them to notify law enforcement if their firearm is lost or stolen. Reporting lost and stolen firearms can also help reduce gun trafficking.

-Bills on lost and stolen reporting in the House and Senate have gained 50 co-sponsors from both sides of the aisle.

Nearly a quarter of all gun owners report storing all of their guns in an unlocked location in their home. Unsecured firearms can lead to tragedies such as unintentional shootings, suicide, and mass shootings when a child or prohibited purchaser can easily obtain access to a deadly weapon. This legislation requires locked storage of all firearms when there is someone in the home who cannot legally obtain a firearm.

-This bipartisan legislation has gained 33 co-sponsors in House and Senate.

This is what we’re fighting against:

Right now in Harrisburg, there is growing support for an expansion of preemption. Preemption blocks cities from passing their own gun laws like banning guns from public buildings and parks. Now, NRA-backed politicians are trying to expand that law to financially hurt cities by forcing them to pay the legal fees of out-of-state gun groups suing our cities and leaving Pennsylvanians holding the bag.

There’s a lot do this year to make Pennsylvania safer and we need your help. Join our movement and make a difference in the fight to end gun violence.