CeaseFire Pennsylvania calls on US Senate Candidates to support commonsense 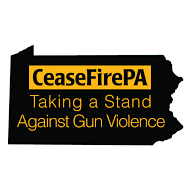 Philadelphia, June 14, 2016 – In the wake of Sunday’s horrific mass shooting in Orlando, CeaseFire Pennsylvania, a group that advocates for commonsense reforms to reduce gun violence, today called on the candidates for U.S. Senate, Senator Pat Toomey and Secretary Katie McGinty, to pledge to support and advocate for a series of commonsense measures designed to keep deadly weapons out of the hands of those who should not have them.

In an open letter to the candidates, CeaseFire Pennsylvania enumerated five policy measures that it urged the candidates to pledge to support:

2. A renewal and strengthening of the Assault Weapons Ban

3. A ban on high capacity magazines

5. Prohibiting those convicted of misdemeanor hate crimes from purchasing firearms

CeaseFire Pennsylvania urged the candidates: ” As a candidate to represent Pennsylvania in the United States Senate, you are seeking a leadership position where you can have a unique influence on federal gun policy.  We know from experience that sensible measures can dramatically reduce gun violence.  While any one measure will not prevent all harm, a combination of reasonable measures would save many lives. ”