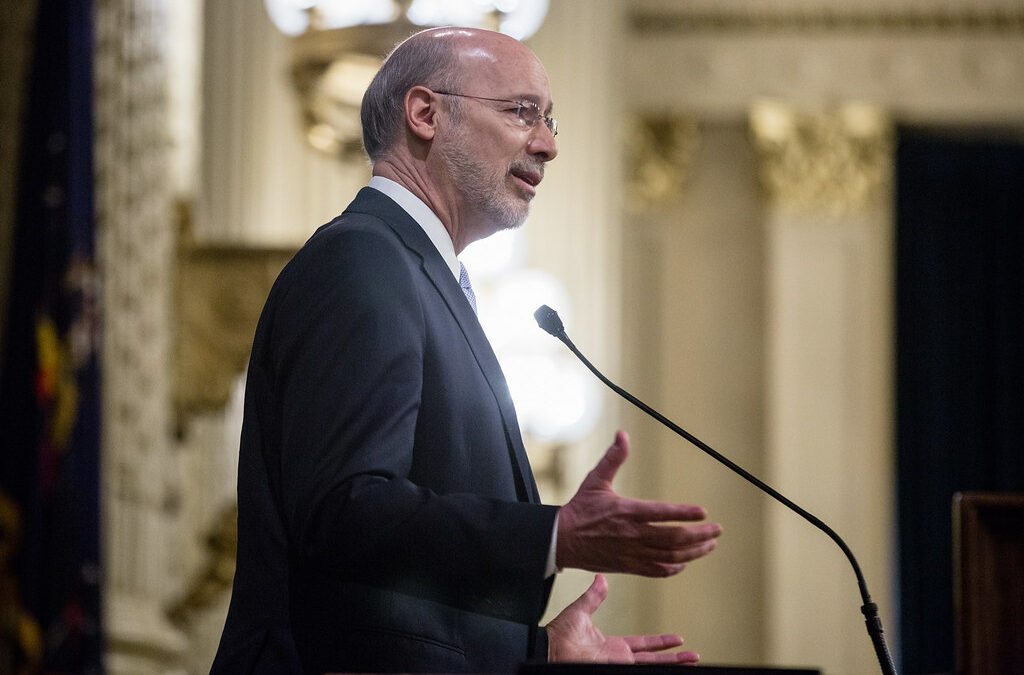 Today Governor Wolf used his budget address to call on legislators to act. He said loud and clear, “To let another session go by without action would be a failure of imagination that will cost lives.” There are bipartisan life-saving bills collecting dust while lawmakers refuse to hold a vote. It’s time for them to do their job and enact background checks on all firearm sales, lost and stolen reporting, and extreme risk protection orders. We’re grateful for Governor Wolf’s leadership on this issue.

But there’s an empty seat here in the chamber. Right over there.

I’d like you to imagine Erie’s Elijah Jackson sitting in that seat. He’d be 21 years old now, perhaps training to serve our country in the Air Force like he always imagined.

His mother, Vanessa, who’s here today, told me that Elijah loved to dance. He loved to play
basketball. And he loved to make his brothers and sisters laugh. He wasn’t just the life
of every party – he was the life of his family. Vanessa remembered one day in particular, his
junior year of high school, when he sat on her lap and promised that, once he graduated and
joined the military, he would take care of her. That was Elijah.

Turns out, it was a turf war that Elijah had nothing to do with. Turns out, the gun that killed
him didn’t belong to the person who pulled the trigger, but rather to a veteran suffering from
addiction. Turns out, there were so many weapons involved and so many shell casings found
that it was hard to prove exactly who had fired the shot that happened to hit Elijah Jackson, and the case against some of the defendants fell apart.

But what it all adds up to is the same story we’ve seen repeated over and over again. An innocent Pennsylvanian is robbed of a future that should have been their birthright. A family is robbed of a loved one. And all of us are robbed of the contributions someone like Elijah Jackson would have made to our Commonwealth.

We have no way of quantifying what we lost when Cecil and David Rosenthal were killed at the
Tree of Life synagogue or when Gerard Kozic died while sheltering his wife from a hail of
bullets at a municipal meeting.

And our losses aren’t limited to the horrific acts of mass violence that make the news. They
happen every day. A trans woman like Tamika Michelle Washington is murdered in the kind of attack far too common in the trans community. A decorated veteran like Sergeant Russel Crupe takes his own life — a tragedy far too common among his fellow service members.

I understand that unimaginable tragedy is part of life. But when it comes to gun violence, we have gotten to a point where these kinds of tragedies are no longer unimaginable at all.

We have gotten used to that little worry that creeps into the backs of our minds whenever we
enter a shopping mall, or a sports stadium, or even a house of worship.

And, unfortunately, we have also gotten used to hearing politicians offer their thoughts and
prayers and little else. It’s part of the ritual now, right alongside the somber press conferences
where law enforcement officials detail the carnage and the tearful testimonies from friends and family grieving their loved ones.

So the question is: Why can’t we act? Why haven’t we tackled this like other states have?

I know that, across this Commonwealth, there are law-abiding, responsible gun owners. There are those deeply concerned about the Second Amendment. And I support their right to be heard when it comes to gun safety reform.

Can you honestly say that you don’t care just as much as anyone else about making sure that
doesn’t happen?

Can you honestly say that you don’t believe there’s any way to protect both your family and the Constitution?

And when it comes to the people here in this chamber who have no intention of coming to the
table on this issue, whether out of ideological conviction or political calculation, well, you have a right to your opinion, too.

But let me ask you something: Can you look at your family and honestly say that you wouldn’t
do anything, pay any price, to protect them?

Can you look at Vanessa Belen, or any of these families, in the eye, and tell them that their families weren’t worthy of the same?

Can you look at the empty chair in this chamber and say you’ve done enough to stop this epidemic?

We know that gun violence has become a public health crisis – and we know what the solutions are.

We know that stronger reporting requirements for lost and stolen firearms keep guns off the streets.

We know that red flag laws keep guns out of the hands of people who are a danger to themselves or to others.

We know that making our schools safer isn’t just about metal detectors and armed guards at the door, but about counselors and social workers inside the building to help kids who are struggling.

No law can eliminate every act of gun violence. But the steps I’m proposing are supported by the evidence – and supported by the vast majority of Pennsylvanians. We can pass them tomorrow, and, by doing so, we could make our Commonwealth safer.

I hope the legislature joins me at the table on this. To let another session go by without action would be a failure of imagination that will cost lives.