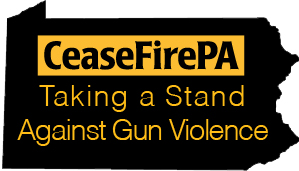 PHILADELPHIA, PA- Yesterday, NRA Board Member Ted Nugent posted an anti-Semitic, hate-filled screed about gun violence prevention leaders and activists. His post featured pictures of twelve individuals — all Jews – who have supported stronger gun laws, and each picture was emblazoned with the Israeli flag.  The post was accompanied by hate-filled language about how those pictured were foes of liberty.

CeaseFirePA and our former Executive Director Max Nacheman were featured in the post.  While we were pleased that our work is rankling Nugent and was recognized alongside that of some of our great partners, we were disgusted by Nugent’s shameful reliance on hatred as the fuel for his rant.

Today, Nugent doubled down in another Facebook post, calling those who work for stronger gun laws Nazis. Clearly, he is sinking further into the pit of hatred and ignorance that is the sanctuary of extremists.

“There are deep divides about guns and gun policy — based on politics, geography and personal history. We fight intensely for our positions in the legislature and in the courts, in the media, and in the public sphere.  We expect the same of those who disagree with us. What we will not tolerate is hatred, bigotry and ignorance. Ours is a movement that is uniting people across borders of geography and politics because bullets do not discriminate by age, race, gender, ethnicity, or economic status.

The NRA and others who disagree with our gun violence prevention agenda should disavow Nugent and his hate-filled rhetoric.  Failure to do so will clearly signal agreement with and acceptance of hatred, bigotry and ignorance.  The American people deserve to know.”