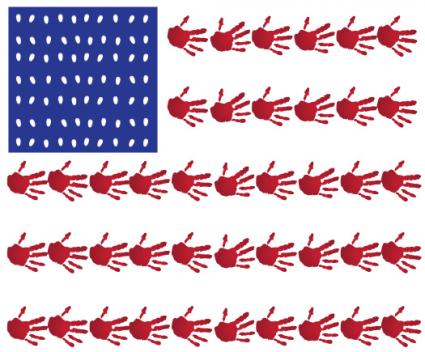 The Philadelphia Inquirer published an article last week titled, “Bloody weekend the latest in a violent first quarter of year.”

The article details the recent shootings this last weekend in Philadelphia including the accidental shooting of 5-year-old Tahirah Phillips. Investigators discovered that her father accidentally shot her in the head and then before fleeing, smeared blood on the 5-year-old’s face in an attempt to make it appear that Tahirah shot herself.

12 hours later, a 46-year-old man barricaded himself in his home after shooting three people dead with a shotgun.

Then on Sunday, a police officer was shot in the leg while trying to stop a suspected carjacking. The Officer James McCullough was in stable condition according to police.

Over the weekend a total of 4 people were shot dead and 12 were injured by injured by firearms.

The Philadelphia inquirer article reports that “As of Monday, the city had recorded 78 homicides since Jan. 1, up 17 percent from the same point last year and the highest pace since 2012, according to police figures. The number of shooting victims, meanwhile, was up 44 percent – from 228 at this point last year to 329 as of Sunday night. Aggravated assaults involving a gun were up 9 percent over last year, police figures showed.”

While the city’s overall violent crime rate is down by 4 percent compared to last year, Commissioner Richard Ross said the uptick in gun crimes, for example, comes even as police have made 34 percent more arrests for firearms violations compared with last year.

Chad Dion Lassiter, president of Black Men at Penn School of Social Work Inc., an activist group based at the University of Pennsylvania, said Philadelphia should start looking at its crime rate differently.

“We have to start framing violence as a public health crisis,” he said. “We need to deal with the unacknowledged and un-diagnosed trauma that exists in our communities.”

As of this week, there have now been 86 homicides in Philadelphia, that’s a 22% increase than this time last year in 2015.

We encourage you to read the article and share with others.