Rally in the Rotunda 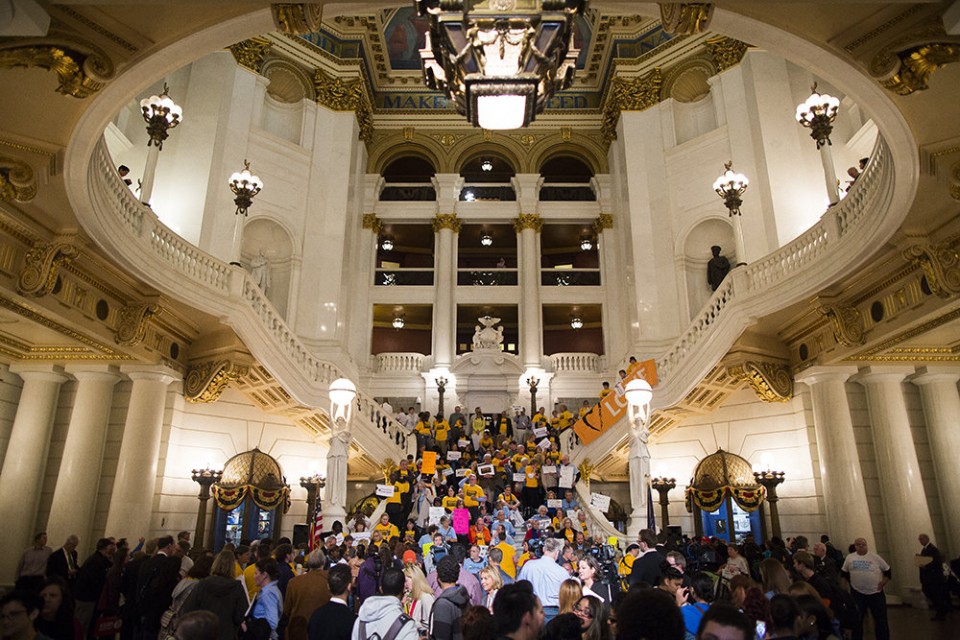 Yesterday hundreds of supporters rallied on the steps of the capitol’s rotunda for universal background checks. CeaseFirePA joined several other organizations including Pennsylvania United for Background Checks, Moms Demand Action, and Delco United for Sensible Gun Policy to rally for House Bill 1010 and its companion legislation Senate Bill 1049. The gathering was the largest rally for gun violence prevention in Pennsylvania state history.

In Pennsylvania, anyone can sell long guns, including military-style weapons like AK-47s or AR-15s, without conducting background checks on the buyers. Although handguns are used more often in crimes, likely because they are cheaper and easier to conceal, long guns are used disproportionately by domestic abusers to kill women and by criminals to kill law enforcement officers.

“As a former police chief, I know that guns in the hands of criminals and domestic abusers create dangerous conditions for all of us, especially law enforcement,” said Rep. Dom Costa of Allegheny County. “I’m a gun owner, and no one has been a stronger supporter of our Second Amendment rights than I have. Law abiding gun owners agree with me that it makes no sense to allow people to buy any kind of gun without a background check.”

The Pennsylvania Police Chiefs Association joins CeaseFirePA, Pennsylvania Coalition Against Domestic Violence and community groups across the state in support of the bill.

“The PA Chiefs of Police Association supports background checks on all firearms sales because background checks work to keep guns out of the hands of criminals, people with severe mental illness and those subject to active protection from abuse orders,” said the PA Chiefs’ Second Vice President David J. Spotts. “We want to keep Pennsylvania safe, and we want to keep our officers safe. A strong background check system that covers all sales, regardless of the type of gun or type of seller, is a good way to do that.”

For gun violence survivors who have lost family members, the background check bill has special meaning.

“Background checks keep guns out of the hands of those who should not have them, and a stronger background check system can keep more families from joining the club of mothers, like me, whose families are paying the ultimate price for inaction” said Dorothy Johnson-Speight, founder of Mothers In Charge, an organization of mothers who have lost children to violence.

Coinciding with the rally the Center for American Progress released their “Pennsylvania Under the Gun” report which found that:

Marshall that found that 88 to 91 percent of Pennsylvanians supported background checks on gun sales.

“It’s time to close this inexcusable loophole,” said Shira Goodman. “The movement for common-sense gun violence prevention is growing, and today’s turnout ought to show lawmakers that we’re not going away.”

After the rally, supporters took to the halls of the capitol building to make legislative calls to senators and representatives to urge them to support HB 1010 and SB 1049. While the bills have not made it out of their respective committees yet, support for them is growing. As of Friday both bipartisan bills have over 80 co-sponsors.