See our report on yesterday’s policy hearing on background checks 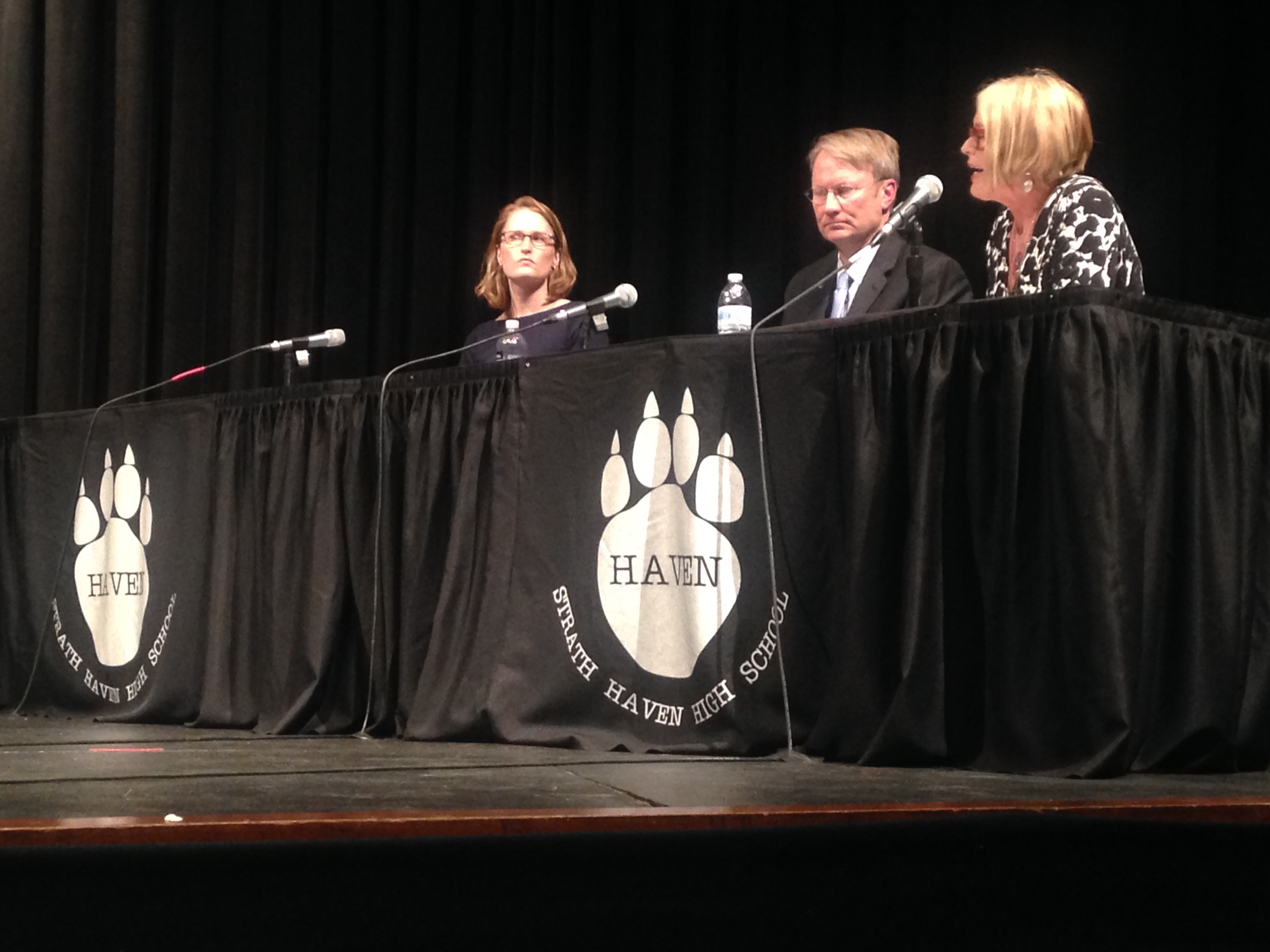 On Monday, May 9, the Pennsylvania House of Representatives Democratic Policy Committee held a legislative hearing on House Bill 1010. The bill, which would close a loophole in Pennsylvania law that allows the private sale of long guns without a background check, has broad support in the House but has yet to be brought to the floor by legislative leaders. The hearing was hosted by Representative Leanne Krueger-Braneky at Strath Haven High School in Wallingford and drew historic numbers of both Democrat and Republican representatives, as well as an audience of about 75.

The first panel began with Josh Shapiro, the chairman of the Pennsylvania Commission on Crime and Delinquency, who declared that background check laws allow everyone to live out their right to follow the American Dream. He spoke of grants that the PCCD has given for scanning machines to state databases and abuse records, as well as the increased state fingerprint compliance rate, all of which would make background checks simpler and more effective.

Next to testify was Major Scott Price, the Director of the Bureau of Records and Identification for the PA State Police. He described the Pennsylvania Instant Check System, or PICS, which allows for timely clearances for firearm purchases. There have been 400,000 calls to PICS’s voice-response system already this year, with wait times averaging 0.75 minutes per call for automated approvals. Price also described FlexCheck, PICS’s web application, that accounts for 50% of PICS transactions and allows mental health agencies to send information to the database electronically.

Superintendent Michael Chitwood of the Upper Darby Police Department spoke next, mentioning the fact that 301,797 Americans were killed because of gun violence in the past ten years, and that 756 children were killed by guns in 2015 alone. On House Bill 1010, he declared that “if we can save one life, we’ve won”, and closed with the self-described Chitwood-ism, “It’s easier to buy a gun in America than to buy a cheesesteak.”

The second panel started with Margie Reilly, the parent of a victim of gun violence. On September 19, 2013, her son Jason was murdered during an attempted armed robbery where he worked. She spoke about how the loss of her son had motivated her to become an activist for background checks, which she said provide “basic protection” for everyone. She also drew attention to the fact that gun violence affects not only those who are physically hurt in attacks, but also those who witness it, citing the example of the 16-year-old girl working with her son who now suffers psychologically.

Testifying next was Robin Lloyd, the State Legislative Director for Americans for Responsible Solutions, which seeks to pass middle-of-the-road, common-sense gun legislation. She brought up the fact that 43% PA of law enforcement officers killed from 2010 to 2014 were killed using long guns, which can be legally purchased through the loophole that HB 1010 seeks to close, and maintained that states should take action on this issue because Congress has failed to enact any federal background check expansion. She brought up the fact that about 90% of Pennsylvanians support better background checks for gun purchases, and states that have closed loopholes in their background check laws have seen a decrease in gun violence.

The final testifier was Dr. Mike Nance, the director of the Pediatric Trauma Program at the Children’s Hospital of Philadelphia. He made the point that kids are not immune to gun violence, which prevents them from reaching their full potential. CHOP recognizes gun violence as a public health issue, and as a result created the Violence Prevention Initiative, a program to reach out to schoolchildren and decrease violence. Dr. Nance also pointed out that, while homicide is the most common form of gun violence in urban areas, firearm suicide plagues suburban and rural areas, making the total risk of death by firearm about equal in all regions. In conclusion, Dr. Nance stated that “the best medical care pales in comparison to the best prevention”, and that gun violence “needs to be addressed like any other health crisis”.

CeaseFirePA has been working for background check expansion for years, and will be joining Pennsylvanians from all over the state to support House Bill 1010 at Rally in the Rotunda on Monday.