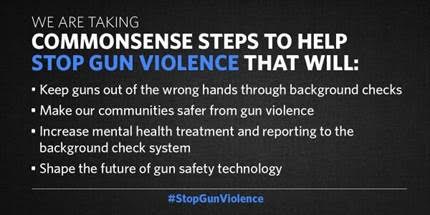 Today, President Obama is set to announce a significant package of Executive Actions to fight gun violence. CeaseFirePA is honored to have been invited to the White House for this announcement.  From what we know so far, this is an aggressive package of executive actions to fight the uniquely American crisis of gun violence.

The White House has released a fact sheet on the Executive Action package that outlines several key areas of focus. Very prominent is the effort to expand and improve the background check system.  This is encompassed in several steps, including refining what it means to be “engaged in the business” of selling guns, so that more sellers will be brought under the purview of ATF and the background check system, putting more resources into NICS to ensure effective and efficient background checks, and renewed efforts to ensure states and other federal agencies share all relevant data with NICS.  A good explainer on the “engaged in the business” issue can be found here.

The focus on improving and expanding the background system is critical to keeping guns out of the hands of those who should not have them. It won’t close all the loopholes in our background check system, but it’s a start towards bringing more sales into the system. The additional focus on ensuring we have the resources and the regulatory system to crack down on traffickers and the illegal gun trade is a crucial element in the effort to stop the flow of illegal guns.

We hope the President’s actions will inspire our Governor, state legislators and congressional delegation to take further steps to keep us safe.